Two nights ago was the lunar eclipse. I am finally rested up enough afterward to write about it... (long long night with no sleep)

After procrastinating a bit I was able to, on short notice, put together a shoot to capture the event. Unique Photo rented me a 100-400 f5.6L IS lens which was the longest lens they had in their menu..

Now what I should have done was posted up some info/hints on how to get good photographic results.. of course I didn't think about it till afterward (And when I saw all the people saying they were out there with their cameras)... so this is the info I should have said earlier..

Eclipse shots are a significant challenge. You are basically shooting a target that is:
The fact is that you won't be able to capture what your eye sees... Digital cameras have no where near the amount of dynamic range that your eye has. So once you get over that, you have to figure out how to deal with the technical challenge.

Firstly, you need a long, fast, lens. In general you want to get as long of a telephoto as you can. 200mm would be a minimum for most cameras. Even at 400mm you will need to do some cropping. Because you will be using such a long focal length you must, ABSOLUTELY MUST, keep the camera steady. This means a really solid tripod, and preferably a wireless trigger.You will also want to engage the mirror lock up before every shot.

The next consideration is that the subject is going to be dark, and moving. The moving part is the most prohibitive..if it were steady you could just use whatever exposure time you want. Here you need to be as short as possible. Practically you want to keep it less then 1 second (1 second i think is really the limit for reasonable sharpness). The faster the shutter the sharper the shot obviously. To accomplish this you will want that fast lens down to f2.8. Your ISO should be just high enough to get the exposure right.. no more. Image noise is worst in the shadows and we are capturing a lot of shadows here.

Of course.. fast telephotos are really REALLY expensive (400mm f2.8 is ~$8000). You will likely have to settle for a f5.6 lens. In this case you will end up with shooting closer to 1s, and a higher ISO then you really want.. Alternatively you could get your hands on a mount with a star drive (one that tracks the movement of the moon/stars/etc) then you don't have as much of a problem with the long exposure.. so lower the ISO accordingly. Another approach is to use a telescope with camera mount (and the star drive).... but that is a whole other ball game.

If you don't have a tripod, or a fast lens.. then your only real hope is to jack your ISO up to as high as you can so you can get the shutter speed down.. use some image stabilization if you have it.. You'll end up with really grainy images but at least you'll get something..

Anyway... so that is how you wanna approach it next time. LOL. (squirrel that info away till 2014..)

My experience I can sum up with one word.. COLD. It was freezing out. I started shooting right as it began at about 1:30am. I continued on till just after 4am when totality was over and the moon started to go behind trees. For the non totality shots I used 1/125 f8 ISO 100. Once in totality I had to jack it up to 1s f5.6 ISO 800. In the end I was not very happy with the sharpness, and the noise level, but it was the best I could do with the lens that I had to work with. With some noise and sharpness processing the results are usable.. but certainly not as high quality as I set out to do (then again maybe I shoulda prepared better LOL).

I've only processed fully one picture so far... have not had much energy/time to do more: 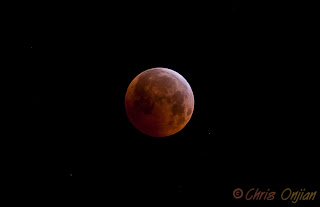 On another note.. somehow I fried my X-Keys pro macro keyboard. This is the 58 key console I have linked to photo shop shortcuts.. I have gotten totally dependent on it (And my wacom tablet of course).. so the fact that it is non operational is a big deal for me... (and I still have work to do! Bleh). Not sure what happened.. it may have been a static shock that happened a day or so ago.. but don't know for sure. So I guess I'll be ordering another one... :(
Posted by Chris Onjian at 4:46 AM No comments: